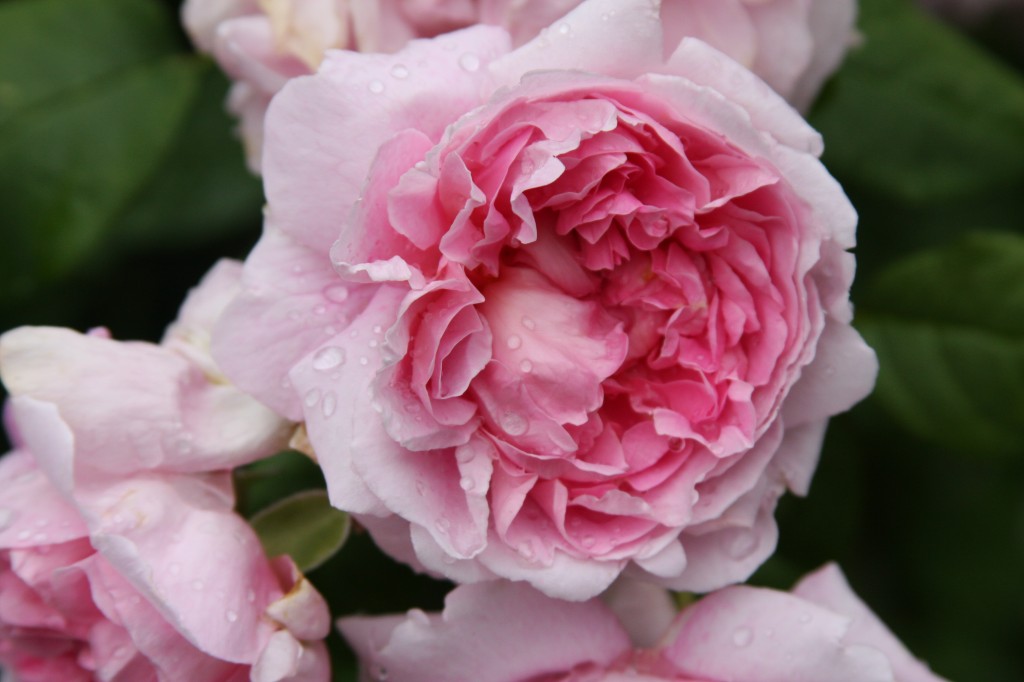 The shot is true, a low laser, past an outstretched goalie, into the corner of the net.  After he scores, Mr. Parker performs a joy unrestrained airborne jig, and bumps torsos with another teammate as the fans dance and cheer, GOOOOOOAL!

What makes this story so special?   Mr. Parker has only one leg.  The other was amputated during Liberia’s 14-year devastating civil war.

Mr. Parker’s stride-with metal crutches and arm braces-is a cross between a gallop and a hop, a motion that is both graceful and athletic.  It is extraordinary football (or soccer in our translation) to watch, because every player, including the goalie, is an amputee.

(This is not about sympathy.  In the land of the one-legged, the rules require that the one-armed man is the goalie. The goal is half as wide as a regulation net. But the goalie can’t leave the box and he can touch the ball only with his intact arm, not his stump.)

Here’s what impacted me.  The people watching no longer see defects.  “Now,” in the words of one of Mr. Parker’s teammates, “people talk to me like I am a human being.”

Watching the World Cup on this Father’s Day–and enjoying the fever pitch in Brazil–I think of Mr. Parker. And of a day a few years back, while sitting at a bar expecting SportsCenter, when I ended up watching an ESPN special on Liberian football.  (It’s not good form to cry at happy hour.  I don’t really know if that’s the rule, but somehow, I’ve internalized it.  So, I pretend I have an allergy.  Regardless, I can’t get the picture of Mr. Parker and his teammates out of my head.)

Mr. Parker likes the way strangers greet him on the street with shouts of “Big Player.”  Which is a lot better than a year ago, when they used to jeer and call him “Killer.”  Dennis Parker is not the only casualty of Liberia’s war.  There are thousands like him.  Amputees.  And after the war, they became the burden and blemish of Liberian society.  “A disabled man is useless here,” says one player.

Back then, people would see him–a beggar with one leg–and guess correctly that he had lost the other one fighting in Liberia’s civil war. In that conflict, boys were given an AK-47 assault rifle, and sugar-cane alcohol to make him brave enough to use it, and grew up thinking that the unspeakable was acceptable, in a world where boys and young men were routinely raped, robbed and murdered in a drugged-up frenzy.

Now, after the war (former President Taylor is now serving a 50-year sentence in The Hague for atrocities his men committed in neighboring Sierra Leone), the quandary is especially vexing when it comes to amputees. Deeply impoverished, Liberia offers no welfare for the disabled, who find the few jobs that do exist beyond their grasp. “They don’t even count you,” says one.

In this world, the Amputee Football Federation of Liberia was born, where hopelessness seemed the only option.  Enter the Rev. Robert Karloh, one of the soccer league founders, who believes the sport helps make men like Mr. Parker, and Liberia itself, whole again.  Unabashedly, the Reverend tells the men, “The amputation does not remove God’s purpose for you.”

Indeed, amputee soccer in Liberia is as much about reconciliation as it is about competition. Former fighters from enemy militias now wear the same uniform. Mixed among them are civilians who got caught in the shooting and slashing. Together they play, sing victory songs and share pairs of shoes, according to fellow amputees’ needs.  “This is the time for us to reconcile,” says Karloh, “It’s not time to look at the past.”

You and I can pretend.
We can put on a brave front.
We can try to be someone that we are not.
But the truth is this: we are all broken.
We are all, in some way, amputees.
Somewhere.
Somehow.
In some cases, it is self-inflicted… there are so many ways that we imprison ourselves, or at least are helplessly stalled.

There are many–like Mr. Parker–who have experienced the capriciousness of life.  Life wasn’t fair, and they (we) wear the scars.  Not only the scars, but also the heaviness of being backed into a corner. And that is where we are given a choice. Richard Rohr reminds us that “if we cannot find a way to make our wounds into sacred wounds, we invariably become negative or bitter–because we will be wounded. All suffering is potentially redemptive, all wounds are potentially sacred wounds. It depends on what you do with them.”

In our Western mindset, we exacerbate any conundrum by seeing life–including its wounds–as a problem to be solved.

Here’s the deal: Once we use the paradigm where we believe we cannot live with our brokenness, it will mean that we spend all of our energy trying to fix it.  Or make it right. And…
…we mistrust and apologize for unsettled emotions,
…we believe that life is something to overcome,
…we live stuck, focused only on what we fear.

Lord knows we don’t enjoy vulnerability.  Security is a whole lot easier to swallow.  (And a whole lot easier to sell, by the way.)  To embrace THIS life, this broken life–fully and freely–requires the price tag of risk.  And that’s just too much to ask.  So. We bring God into the collusion.  You know, pray that He will make things better.  Smoother.

This is all connected–oddly enough–to Sabbath.  Did you know that Sabbath is fundamentally about liberation?  In the Old Testament book of Deuteronomy, the Jewish people are told to keep Sabbath as a reminder of being freed from slavery in Egypt.  Karl Barth said that what the human soul fears most is liberation.  Go figure. No wonder we are so conflicted about Sabbath.  Sabbath for us can be a time to break free from our burdens and responsibilities and everything that we may blame, and get our minds and hearts and spirits so far away from them that the child in us can come out to play, to wonder and delight in this day.  To see the Kingdom right in front of us.  Even with one leg.

Maybe it’s only about football.  But the trickle down to other parts of Mr. Parker’s life is evident.  He rents a room in a house (for $5 a month) on the outskirts of the city, where he lives with his girlfriend and four of his children.
He is no longer ashamed to ask his family for help.
And.  Mr. Parker no longer begs.

Now that… that is freedom.

It has been a Pacific Northwest June day, meaning clouds, sun-breaks and a couple of storms passing through. After one down pour, I walked the garden to see the kind of havoc wreaked. I have to smile when I realize that while disheveled, the plants, laden with flowers and blooms, always handle chaos better than I do.

I love the dark hours of my being.My mind deepens into them.
There I can find, as in old letters,
the days of my life, already lived,
and held like a legend, and understood.
Then the knowing comes: I can open
to another life that’s wide and timeless.
So I am sometimes like a tree
rustling over a gravesite
and making real the dream
of the one its living roots
embrace:
a dream once lost
among sorrows and songs.
Ranier Maria Rilke

More than Mundane
If the mundane is
–all there is–
then I cannot ask the big questions.
The one about meaning or
What are we here for? or
Where do I go when I die?
If everything is sacred,
surprising,
then you are fine
the way you are,
I can do this strange dance
though it may not be how I planned it,
and I learned, everyday that
we become
a
discovery.
Robin Heerens Lysne

Gene Logsdon's father-in-law had tried his hand at making bootleg whiskey on his Kentucky farm.…

By most measures, he was nondescript: a youngish white man in blue jeans, a long-sleeved…

Hiding place for the holy

My walk this morning is in a new neck of the woods. I will be…