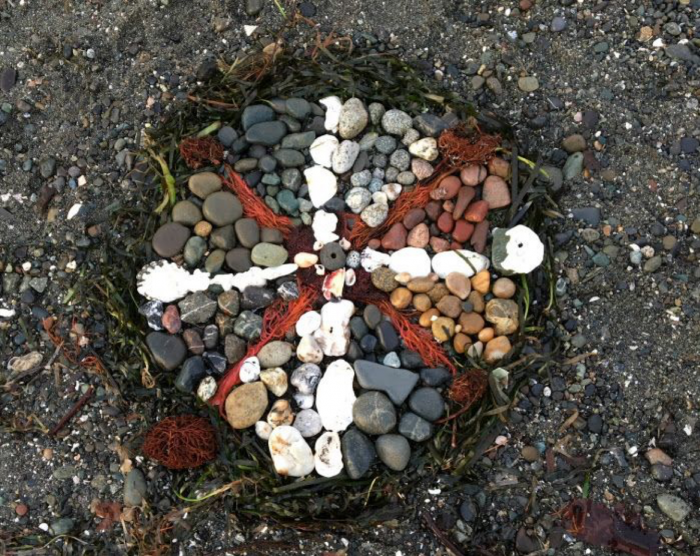 Sometimes a person needs a story more than food to stay alive. I know it’s true for me. This week, a story from poet Naomi Shihab Nye.

Wandering around the Albuquerque Airport Terminal, after learning my flight had been delayed four hours, I heard an announcement: “If anyone in the vicinity of Gate A-4 understands any Arabic, please come to the gate immediately.”
Well—one pauses these days.
Gate A-4 was my own gate. I went there. An older woman in full traditional Palestinian embroidered dress, just like my grandma wore, was crumpled to the floor, wailing. “Help,” said the flight agent. “Talk to her. What is her problem? We
told her the flight was going to be late and she did this.”
I stooped to put my arm around the woman and spoke haltingly. “Shu-dow-a, Shu-bid-uck Habibti? Stani schway, Min fadlick, Shu-bit-se-wee?” The minute she heard any words she knew, however poorly used, she stopped crying. She thought the flight had been cancelled entirely. She needed to be in El Paso for major medical treatment the next day. I said, “No, we’re fine, you’ll get there, just later, who is picking you up? Let’s call him.”
We called her son, I spoke with him in English. I told him I would stay with his mother till we got on the plane and ride next to her. She talked to him. Then we called her other sons just for the fun of it. Then we called my dad and he and she spoke for a while in Arabic and found out of course they had ten shared friends. Then I thought just for the heck of it why not call some Palestinian poets I know and let them chat with her? This all took up two hours.
She was laughing a lot by then. Telling of her life, patting my knee, answering questions. She had pulled a sack of homemade mamool cookies—little powdered sugar crumbly mounds stuffed with dates and nuts—from her bag—and was offering them to all the women at the gate. To my amazement, not a single woman declined one. It was like a
sacrament. The traveler from Argentina, the mom from California, the lovely woman from Laredo—we were all covered with the same powdered sugar. And smiling. There is no better cookie.
And then the airline broke out free apple juice from huge coolers and two little girls from our flight ran around serving it and they were covered with powdered sugar, too. And I noticed my new best friend—by now we were holding hands—had a potted plant poking out of her bag, some medicinal thing, with green furry leaves. Such an old country tradition. Always carry a plant. Always stay rooted to somewhere.And
I looked around that gate of late and weary ones and I thought; This is the world I want to live in. The shared world. Not a single person in that gate—once the crying of confusion stopped—seemed apprehensive about any other person. They took the cookies.
I wanted to hug all those other women, too.This can still happen anywhere. Not everything is lost.
(Thank you Naomi.)

Compassion can still happen when we give way to the “tender gravity of kindness.” Encounters with no stain of stingy or cruel or callous or shame. Yes. Because every one of us hurts and yearns, and longs to be seen and valued.

One of my favorite stories to tell at workshops is about a Special Olympics summer event held in Seattle. Nine contestants each with disabilities ready for the 100-yard dash. One could say that it’s not so much a dash really. More like a good paced saunter. The starting gun sounds off. One boy stumbles, falls at the start, scrapes his knee and begins to howl. No adult stepped in. The other eight have begun down the track. They all hear the wail. And they stop. Every one of them. And they turn to see. They all come back to the young man now sitting on the asphalt. They hug him and give him kisses. One says, here this will make it better. He stands. And they all link arms, all nine. And race the 100 yards together, crossing the finish line as one.
Too good to be true?
Well, as it turns out, it is. The other eight did not all come back.
(When I found out, it was tough to swallow. I’ve seen the story in many books.)
It is however, real life. You know, not everyone comes back. Not everyone finds safety. (And, as storytellers, you don’t need to add fuel to a fire by misleading as a means of comfort.)
So, let’s be honest. There is real pain. There are real scraped knees. There are times when no one notices. There are times when we feel alone.
And we look for hope. And I look to stories.
Because here’s the deal: Even if they all didn’t come back, I will still tell the story. But I will tell it like it is. You see, eight did not come back, but two did.
Two. So yes. This can still happen. Not everything is lost.  Someone did notice. Someone did come back.
Okay, let’s make this real. Maybe this week, I can be the one to notice. I can be one that comes back.

My mind was preoccupied this week. My desk top computer died. Not a surprise, as it is from 2007, so that makes it, how shall we say this, “elderly.”
So, I spent the day in the Apple Store, at the table for Amish customers and their ilk. I learned that backing up data is probably a good and necessary thing to do. Oh well.
I did for most, but apparently not all. So, some documents are gone. In the end, I bought a new computer. As I was transferring files from what I had saved on a backup drive, an employee came over to check on my progress. She looked at the screen and asked, “Why on earth are you giving so much memory to that folder of damaged files.”
I wanted to give her a hug and say thanks, but hugging isn’t a thing in an Apple store.
How much emotional energy do I give to damaged files? Indeed. No wonder we often have little room for kindness or sharing. It’s about what we make room for.

I am finishing this on a plane. Which means I’m not watching the Super Bowl (a first for me). Headed to Guatemala for a few days. One of my favorite places. With sun and gentle living. And, my dentist is there. That’s okay. Even the good stuff comes with a little pain.
In the end, it’s about what we make room for.
Today? I want to try kindness and mercy.

Quote for your week…
We’ve learned to fly the air like birds, we’ve learned to swim the seas like fish, and yet we haven’t learned to walk the Earth as brothers and sisters. –Martin Luther King Jr.

Silence is really vital to the human heart.
You see the human heart can’t live with
Constant sound or noise.
It needs silence in order to heal itself.
The only two things that are ultimately required for spiritual
homecoming are stillness and silence
If in your day you can build little windows of silence
and little windows of stillness
You will never lose touch with your deepest voice.
You will never lose touch with your most secret belonging.
Even though you walk and talk in the world
You will never leave the inner, tender home of your soul.
Charles William Golding (1931-2004)

Take care of one another

This past week, I watched real-time TV images of devastation. Houses and businesses and lives…

This week I received news that someone I love is near death’s door.Like the earthquakes…

To go where it hurts

A mother begins her weekend breakfast routine, pulling ingredients from the refrigerator. Omelets on the…